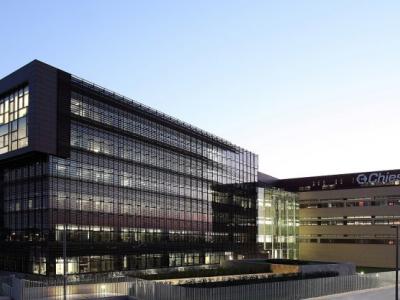 Parma, April 20, 2017 – Chiesi, Farmaceutici, an international research-focused healthcare group based in Parma, Italy, present in 26 countries, closes 2016 on a high with an annual turnover of €1.571 million, an increase of more than +7.0% on the previous year (+9.6% at constant exchange rates), and EBITDA equal to €448 million (a year-on-year increase of over 8.2%). The robust health of the company is reflected by its investment in innovation and development, with R&D expenditure rising by over +12.5% in the 2015-2016 period to reach €340 m in 2016, 21% of total sales. The Group currently has 51 active research and development projects. The total number of employees now stands at over 4,800: people as a central focus, passion, entrepreneurial spirit and intercultural dialogue are the values on which the company will continue to base its development in the coming years.

“Our company is based on an entrepreneurial spirit that characterises every aspect of our daily activities, as well as a constant commitment to innovation – says Alberto Chiesi, President of the Chiesi Group –This commitment has seen us grow pursuing our mission of developing pharmaceutical solutions that improve the quality of human life. From a small laboratory in Parma, we have expanded our capabilities and our presence year after year to become one of the top 50 pharmaceutical companies in the world.” Alberto Chiesi concludes “However, a company is a community made up of people linked by shared goals, who aim to provide goods and services for the territories in which the company operates, to achieve personal and corporate wellness, and lend support to the social, cultural and economic life of the areas it can reach. We wish to thank all our people in the various departments at our headquarters and the affiliates, for their passionate, intelligent and proactive participation in our business growth.”

The respiratory drug market is one in which Chiesi is a key global player, and a number of brands in its portfolio are continuing to generate significant growth and revenue: Foster® (beclomethasone dipropionate and formoterol fumarate) generated sales for €583 million, with an increase of 16.6% on 2015. Curosurf® (poractant alfa), has exceeded €209 million euro, up by 4.3% on 2015, thus confirming its global leadership as a life-saving medicine. Entirely developed and manufactured in Italy, this drug is indicated for the treatment of respiratory distress syndrome, a rare disorder that impairs lung function in premature infants. Clenil® (beclomethasone dipropionate) generated sales of over €174 million, a slight decrease compared to 2015 due to the negative impact of currency fluctuations.

Chiesi’s global presence is reflected by its international sales, which generated 83% of its turnover in 2016. The European affiliates have shown a general turnover increase of 4.9%, reaching the one billion milestone for the first time. Two of its acquisitions in the region Europe for 2016 were:

Moreover, Chiesi Italy, the Italian affiliate of the Chiesi Group, has concluded an agreement with Marco Antonetto for the exclusive distribution rights in Italy of a number of significant brands in the consumer healthcare landscape, such as Digestivo Antonetto, Euchessina and Lievito Sohn.

It has also reached an agreement with The Medicines Company for the acquisition of the marketing rights worldwide of two hospital products, Kengreal® Cleviprex®, and for the US market of the Argatroban® injection. Kengreal®, Cleviprex®, already launched on the American market and some European countries, will help to complete the product portfolio in the field of special care.

The emerging markets, despite currency fluctuations that have inevitably affected the economic growth of the group, have experienced a remarkable growth: Brazil, Turkey, China, Pakistan and Mexico all performed well and grew overall by 14.5% in local currency.

2016 saw the European Medicines Agency (EMA) submission of the dossiers requesting the Market Authorization of two new drugs in the respiratory and rare disease pipeline:

“In 2016 we continued our growth trajectory: in the wake of the success of established products such as Foster, and through expansion in our therapeutic areas, the Group's sales increased by almost 10% at constant exchange rates compared to the previous year. This is a major achievement in difficult economic times that makes us think that we are going in the right direction - comments Ugo Di Francesco, CEO of Chiesi Group– “2017 seems just as promising. Thanks to Trimbow®, for which we expect the marketing authorization later on this year, patients with COPD will have a single inhaler to simultaneously administer two bronchodilators and anti-inflammatory for the first time,. This important therapeutic innovation allows symptoms to be controlled and dangerous exacerbations to be prevented. And also thanks to Lamzede®, which once approved will represent the only hope for children and adults suffering from a devastating disease for which there is currently no authorized medicinal product available”.

Based in Parma, Italy, Chiesi Farmaceutici is an international research-focused Healthcare Group, with over 80 years of experience in the pharmaceutical industry, present in 26 countries. Chiesi researches, develops and markets innovative drugs in the respiratory therapeutics, specialist medicine and rare disease areas. Its R&D organization is headquartered in Parma (Italy), and integrated with 6 other key R&D groups in France, the USA, the UK, Sweden and Denmark to advance Chiesi's pre-clinical, clinical and registration programmes. Chiesi employs nearly 5,000 people.